By entering into a symbiotic relationship with another organism, bacteria can use new food resources and, in this way, also expand the size of their habitat. This is the conclusion of the research group led by Prof. Dr. Christian Kost from the Department of Ecology at the Faculty of Biology/Chemistry at Osnabrück University. His team investigated the importance of partnership interactions for food management using five different bacterial species as examples. The study entitled "Obligate cross-feeding expands the metabolic niche of bacteria" was published in the scientific journal Nature Ecology & Evolution: https://www.nature.com/articles/s41559-021-01505-0 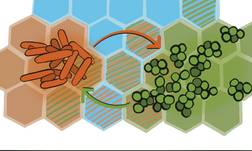 A game of expansion and contraction: Similar to a board game where players have to negotiate with others to gain access to different resources on the map, bacteria can also access new food sources through cooperation. Shown above are interactions among similar species that can only expand to a smaller area (blue lines in the grey hexagon). Below is the effect resulting from interactions among distantly related species that leads to a larger range expansion (green and brown lines on blue hexagon blocks).

"Under these laboratory-generated condition, we observed that the co-culture of two interdependent bacterial strains usually expanded the size of their habitat," reports Prof. Kost. Thus, mutualisms provided the bacterial pairs with a real survival advantage.

In detail, the research team found that pairs of more distantly related bacterial species were able to expand their niche space significantly more than pairs of two more closely related species. Especially specialists that could only use few food resources benefitted from the so-called "mutualistic interaction", because it allowed them to exploit new food sources. In contrast, the study found that being part of a mutualism rather reduced the niche space of generalist bacteria. Put simply: pairs from the category "same and same" as well as particularly unselective individuals did not gain a significant advantage from living in pairs, whereas pairs of different individuals and specialists were able to grow together.
"Our research helps to understand how symbioses and mutualistic interactions affect the partners involved. This type of interaction is widespread in nature and involves not only bacteria, but also, for example, plants and their insect pollinators or nitrogen-fixing bacteria and fungi in the root zone. Our work identifies 'teamwork' as an important strategy that organisms can use to significantly expand their capabilities in nature", summarises Prof. Dr. Christian Kost from Osnabrück University.
Full paper: https://www.nature.com/articles/s41559-021-01505-0