A research team from Osnabrück University and the Ozouga Chimpanzee Project has, for the first time, observed chimpanzees applying insects to their own wounds and the wounds of conspecifics. The new findings have been published under the title "Application of insects to wounds of self and others in chimpanzees in the wild" in the journal Current Biology: https://doi.org/10.1016/j.cub.2021.12.045 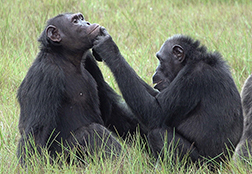 A research team from Osnabrück University and the Ozouga Chimpanzee Project has, for the first time, observed chimpanzees applying insects to their own wounds and the wounds of conspecifics.

The observations provide the first evidence that chimpanzees regularly capture insects and apply them onto open wounds.

The three unrelated chimpanzees seemed to perform these behaviours solely for the benefit of their group member.

Chimpanzees are found across equatorial Africa including the Loango National Park in Gabon which has been home to the Ozouga Chimpanzee Project, led by Dr. Tobias Deschner (Primatologist) and Prof. Dr. Simone Pika (Cognitive biologist) at Osnabrück University. In Loango, the researchers investigate the behaviour of a community of about 45 chimpanzees with a special focus on their social relationships, interactions and disputes with other groups, their hunting behaviour, tool-use and their cognitive and communicative skills.

“Self-medication — where individuals use plant-parts or non-nutritional substances to combat pathogens or parasites — has been observed across multiple animal species including insects, reptiles, birds and mammals”, says cognitive biologist Simone Pika. “Our two closest living relatives, chimpanzees and bonobos, for instance, swallow leaves of plants with anthelmintic properties and chew bitter leaves that have chemical properties to kill intestinal parasites."

However, despite research spanning decades from other long-term field sites in west and east Africa, external application of animal matter on open wounds has, until now, never been documented. "Our observations provide the first evidence that chimpanzees regularly capture insects and apply them onto open wounds. We now aim to investigate the potential beneficial consequences of such a surprising behaviour," says primatologist Tobias Deschner.

But what exactly happened? Alessandra Mascaro, at the time a volunteer at the project, recalls her first observation: "In 2019, I was following a female chimpanzee named Suzee, and watched as she tended to the injured foot of her adolescent son, Sia. I noticed that she appeared to have something between her lips that she then applied to the wound on Sia’s foot. Later that evening, I re-watched my videos and saw that Suzee had first reached out to catch something which she put between her lips and then directly onto the open wound on Sia’s foot. Discussing these observations and the possible function of the behaviour with the team members, we realized that we had never seen such a behaviour and that it had also never been documented before."

A week later, PhD student Lara Southern observed an adult male, Freddy, demonstrating a similar behaviour. The team worked out that the tiny objects were most likely flying insects, given where and how they were caught. During the following year, the researchers began to diligently watch and film all individuals with injuries. They gradually built up a record of 22 events, mostly involving individuals applying insects to their own wounds. Almost a year after Mascaro’s observation of the first insect application to another individual’s wound, Southern observed another event. “An adult male, Littlegrey, had a deep open wound on his shin and Carol, an adult female, who had been grooming him, suddenly reached out to catch an insect” says Southern recalling the event. “What struck me most was that she handed it to Littlegrey, he applied it to his wound and subsequently Carol and two other adult chimpanzees also touched the wound and moved the insect on it. The three unrelated chimpanzees seemed to perform these behaviours solely for the benefit of their group member.”

The authors from the Ozouga Chimpanzee Project and Osnabrück suggest that the applied insects might have anti-inflammatory or antiseptic properties. The use of insects for therapeutic purposes has been dated back in humans to 1,400 BCE and is still popular across human populations covering a variety of insect species with scientifically proven antibiotic and anti-viral effects. Alternatively, another explanation may be that such a behaviour does not have any beneficial consequences but is part of the local chimpanzee culture, just as a large number of medical treatments are in human societies. “For me, being interested in the cognitive skills of chimpanzees, it was particularly striking to witness that individuals not only treat their own but also the wounds of other non-related individuals. Such examples of clear prosocial behaviours are rarely observed in nonhuman species, but these observations may now also convince the sceptics”, says Pika.

As a next step, the researchers aim to recover remaining insect parts to identify the species and to subsequently carry out bioassays investigating the potential pharmaceutical properties. Furthermore, the team will also focus on the social dimension of the behaviour, such as who are the main actors and who are the main receivers of the “treatment”, as well as the social learning processes that allow for its transmission.

"It is just fascinating to see that after decades of research on wild chimpanzees they still surprise us with unexpected new behaviours" says Deschner. "Our study shows that there is still a lot to explore and discover about our closest living relatives, and we therefore need to still put much more effort into protecting them in their natural habitat."